Kris Lemsalu and Kyp Malone work together in sculpture, ceramics, video, music and sound to create installations and performances. The artists began collaborating in 2017 when they created Going Going, a piece for the performance biennial Performa (NY). Kris Lemsalu creates sculptures, installations and performances, in which animals merge with humans, nature with artificiality, and beauty with disgust. She uses natural materials in her work, such as fur, leather, shells, wool and paper, to join animal bodies to porcelain objects, while her theatrical installations take us to the world of our imagination. The artist also uses her installations as sets for performances in which sculptures become part of her costumes, to erase the line between herself and her objects.

In his interdisciplinary practice, Kyp  experiments with painting, drawing, video and sound. He is also a vocalist and an instrumentalist with the Brooklyn-based band TV On the Radio.

In the “Bodymerge” performative lecture series, research by invited artists is combined with discussions on their finished work, with collective meditation and musical and visual inserts. The first meeting in October was led by the French artist Paul Maheke and the Lithuanian artist Antanas Lučiūnas. The Portuguese artist Diana Policarpo and the Lithuanian artist and music creator Gediminas Žygus will invite the visitors to the final event in the series at the beginning of January 2023.

The “Bodymerge” performative lecture series is curated by Neringa Černiauskaitė. The design of the series is by Domantė Nalivaikaitė. The entrance is free of charge. 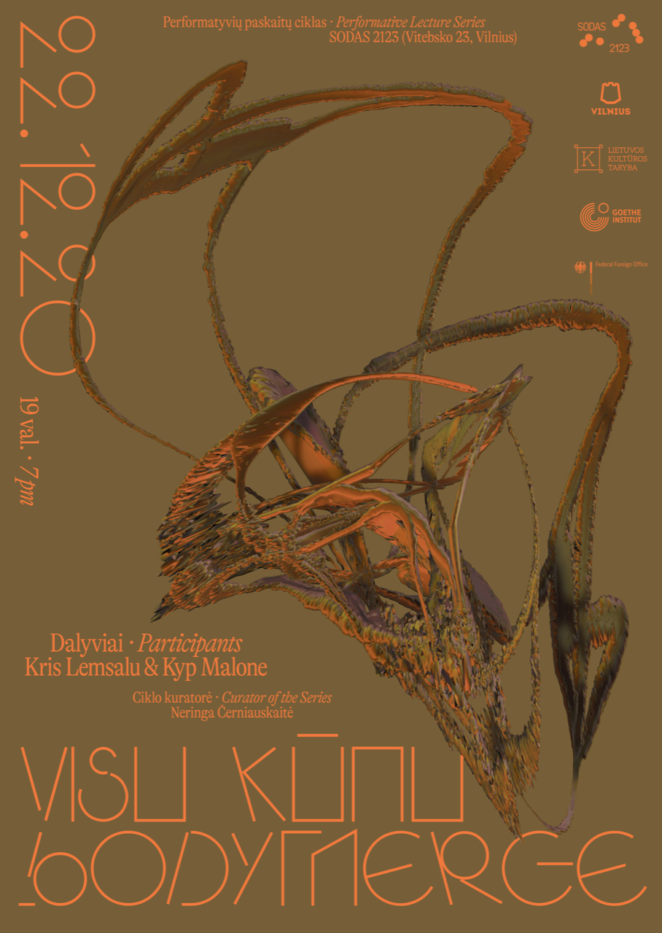