It was five years ago as well when Okapi Gallery from Estonia participated at ArtVilnius for the first time. Since then they have been there every year together with different artists they represent or make collaboration with. Their showpieces have been related to photo and glass art with an experimental touch, so this year’s most popular items were masks and bags made of fabric with photo prints by Temuri Hvingija, one of the owners of the gallery and an artist himself. He considers ArtVilnius to be a regionally important event with a good visibility and if I ask which are the five main things he has got from those five years in the capital City of Lithuania he lists:  consistency, experience, contacts, friends and quality for the gallery. Due to the virus situation and restrictions not all of those things were available this time – a small amount of fear factor could be sensed both inside the organizators, participators and the visitors, there were not so many separate rooms for socialization and the general impression was rather hasty.

The area of the fair was much smaller than usually which amplyfied the feeling of intensity and density.

Birgit Pählapuu, other one of the owners and an artist as well, joined Temuri for the first time and also mentions fear – fear about will there be any public at all? Luckily enough it appeared that the audience was massive especially when to consider the fact the entrance to the fair was with a ticket, not for free. She tells about big interest and positiive feedback of the visitors, emotional value she got from them and all the photos and tags they were taking and making – much more than in Estonia. And although the sales side at the fair is not a goal in itself for the gallery, Birgit feels happy she sold one of her works and also got a personal order to make a totally new artwork of her series were photo art and neon glass are combined. „Lithuanians are quite good art buyers, the majority of our customers at ArtVilnius fairs.“ Besides Temuri’s and Birgit’s works Okapi Gallery represented lenticular photo and sculptures by Maret Sarapuu and mixed media series by Rait Prääts. They also made a collaboration with an inventor and multidisciplinary immersive artist Gleb Divov, who brought in Lithuanian ceramic artists Mingailė Mikelėnaitė and Monika Gedrimaitė as well as AI-composer Musical Blockchain – that proved an international team can be built up despite of the restrictions and ended up with a mixed-media installation named Triasphere sneaking into the virtual digital dimension. The installation consisted of a quite grey landscape with a fly where – once you looked it through a special web app – trees started to blossom, volcano bursted out a rainbow flow and fly shaked its wings. Gleb explains how we can use the application of augmented reality to see the same situation in a different context and vice versa.

It is also a metaphor for ArtVilnius that had to take place already in summer but was postponed until autumn and could be imagined now in the midst of its original happening time.

Temuri and Birgit name their favorites from the fair: Meno Parkas, A-Gallery with its glass installation, Morka Gallery with its extreme and psychedelic orgy-like works that perfectly fit together with their authors own image, Rūta Spelskytė-Liberienė who was announced the best young artist of the fair and last but not least EKA Gallery that was chosen amongst seven best galleries and won Temuri’s attention with its metamorphostic process from the beginning of installation to the end result. „It was interesting to follow how new ideas, parallels and connections were emerging and evolving.“

EKA (Estonian Academy of Arts) Gallery was exhibiting works from students who have studied or are currently studying in the Master of Contemporary Art (MACA) programme – Johannes Luik, Reds Cheung and Kaisa Maasik – who were choosen from 16 candidates. The principle of the choice was that all the works had to complete and match with each other and be technically diverse at the same time. Project manager Madis Luik tells how participating this year was clearly more difficult than previously and they had to be more careful. It all began with travel arrangements and anxiety related to the possibility that Lithuania may close its borders. Fortunately it did not happen and they managed to reach Vilnius by minibus in time. Once at the fair their body temperature was measured on daily basis as part of health inspection, thermometers were ready already at the gates. It was mandatory to wear a mask, too, and photos from the fair illustrate that.

But it did not appear to scare away the visitors neither to decrease the popularity of the fair: ticket queues were long and our booth was never without an audience. „It can be said that we have organized the fair three times this year,“ says Diana Stomienė, director of ArtVilnius, in an interwiev for Arterritory, where one can read more about the back room details. The fair was postponed twice, the paper catalogue was decided to replace with an online version already before the covid-situation, 3D virtual tour is available for everybody who wasn’t able to visit the fair physically, conference was transferred via Zoom – is it a pity or a new, augmented reality of art events? One thing is sure – art will survive, or like Diana Stomienė says: „The virus of art is the most powerful.“ 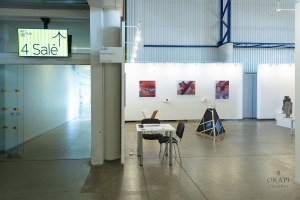 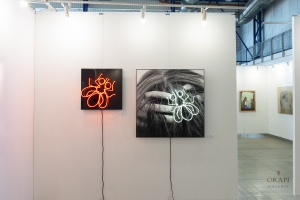 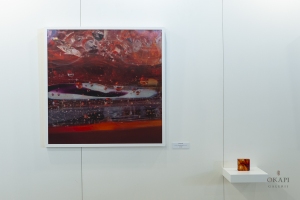 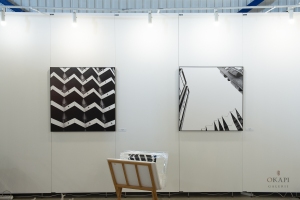 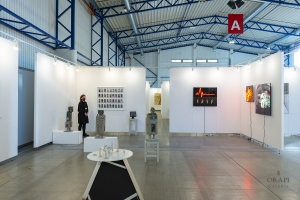 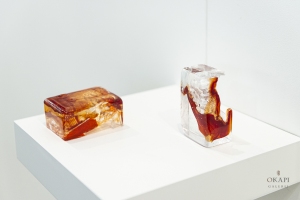 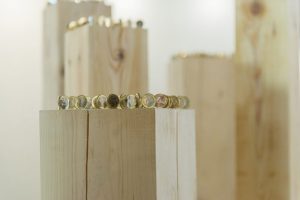 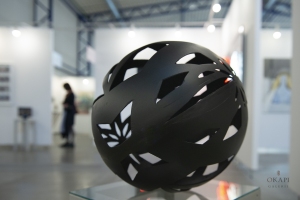 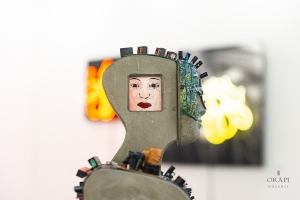 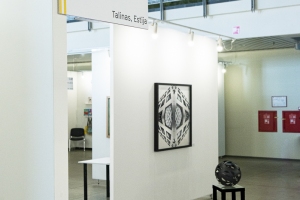 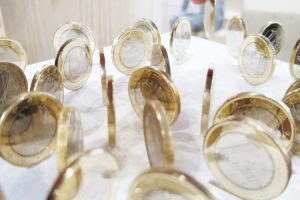 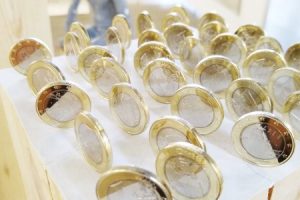 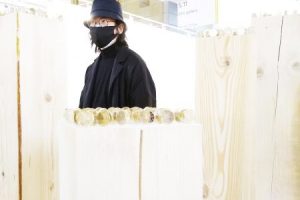 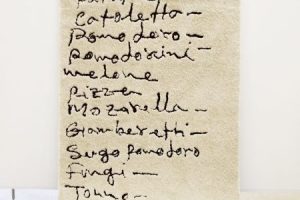 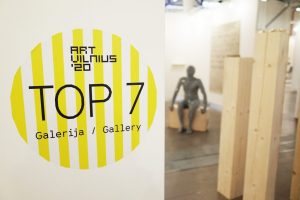 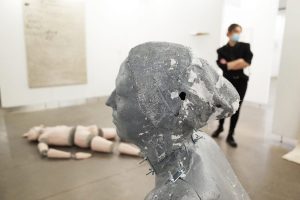 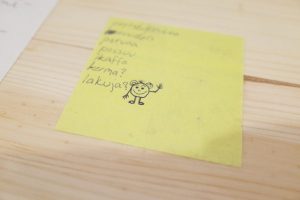 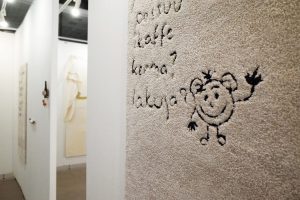