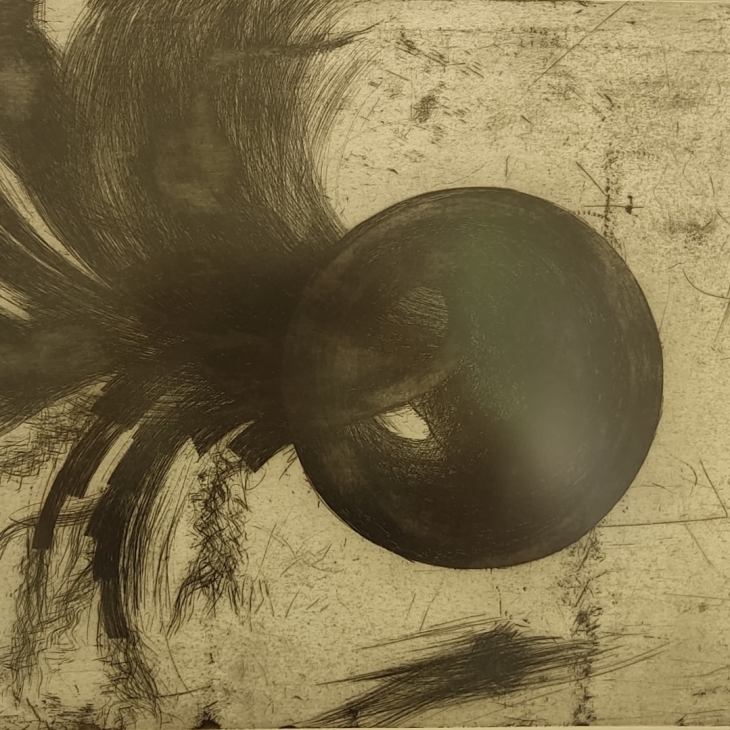 By Laura Marija Salkauskiene
Printmaking
49x59cm
€555
Add to cart
Monthly instalments: from {from} per month

CREATIVE ///context /// Emptying… In this creative project I use different printmaking techniques – etching, mezzotint and author’s technique. I am also exhibiting a sculpture – an object. The velvety black shades and muted tones of the mezzotint reveal the depth of the subject, the indescribable infinite incursions, the sunken Black Holes. I reveal the markings of the void in my work through the line that I weave into my work. The seam line is a minimal touch on space, without dissipating it, only immersing it in the universe of time and infinity. The shapes created by the thread are close to galaxies, I didn’t intentionally aim for that, I leave it to the improvisation of the viewer… I use etching to capture the physical processes that take place in the void, the change of energies. I stamp a “naturalness” into my works, i.e. I use natural elements – plants, insects, fish gills. In this way, I leave traces of living nature, giving these elements a permanence, traces left behind. I press the same markings several times until their natural colours disappear but their DNA remains. Sculpture – Object is an extension of a graphic work made in the etching technique in 3D space. It is a metaphor for the thoughts that are thrown away – everything starts with our thoughts and our will. I try to get rid of them by cleansing, by emptying myself. This is also reflected in my graphic abstractions. In some places I have deliberately aimed for a faded image result, through poisoning and erasure. One of them is named as such – Dissolution. The easiest way to show emptiness is to show nothing. I present the works on the theme of emptiness by means of a juxtaposition. In my works I do not show emptiness on purpose, it is sensed, silenced, longed for and sought. Looking at the works, one feels the opposite reaction – teasing, action, movement, excess, energy. That’s what I’m aiming for. I reveal emptiness as a medium that gives birth to the energy from which everything begins and is created. For me, the void is like a vessel for water – the elixir of life. Emptiness gives birth to life. The life from which everything begins. The erasure, the fading away, symbolises the emptying, the making room for the energetic whirlwinds that create and are reborn in our clean minds. PERSONAL ///context ///Strawberries strung on incense… In my childhood home, the greatest treasure was a lot of paintings. When my parents moved into a new flat, they didn’t even change the wallpaper, because it was replaced by paintings. Strong libraries of sheet music, books, grandparents’ and parents’ libraries (calfskin antique books). Parents also collected sheet music, fiction, everything related to Laura and Maria. The names I was christened with. The library, the collection of paintings, sheet music, records – these were our possessions. That was my world. One summer day, my mother and I went on holiday to Palanga. When we returned, we found the house empty. All that was left was an ancient grandparents’ tachta (a big bed) and a Soviet sofa-bed that was tiringly squeaky, and a piano, where my father used to sit and accompany my mother when she sang. The neighbours then told me how they sat at the windows and counted how many lorries had left our house. I remember vividly how, for the first time in my life, a void opened up before my eyes. What is it? I was about eight at the time. I realised that something was happening… Books, paintings, sheet music had lived their lives without me for a long time. In my father’s studio. After his death, some of the books were donated to the Bernardine Church. They went to the cell where, sitting among them, many years later, I will talk about emptiness with Fr. Julius Sasnauskas. Empty walls. For the first time, I saw the standard, Soviet-style wallpaper decorated with cotton rings. In the corridor, a sketch of the set for the play King Lear, drawn by M. Dobužinski, somehow remains on the wall. A lonely, angry-faced king in a black cloak. Father of three daughters… I began to fear loneliness. It always seemed that I would be abandoned. My mother would go to rehearsals in the mornings, come for lunch, and in the evening she would go to the play. She would come back at night after the performances, which then finished late, around eleven o’clock. While my father was there, he used to sit in his room and write all the time. In his memories, he was still leaning against the desk, by the desk lamp… Perhaps as a child, against my own will, the possibility of a new life opened up. Empty walls. Before every new creative process I have to cleanse, empty myself. Even from what is dear to me. Emptiness, although it entered my life as the first negative experience, has become something I cannot live without today. I am grateful that it has freed me from attachment to things. My parents’ collection, which bears Laura Maria’s name, has never been a possession for me, but a natural environment. Fortunately, I did not get used to it. It was my parents’ passion. It didn’t draw me in. I remained the longed-for and affectionate Laura Marie… (T. Sakalauskas, “Chakona” , Vilnius: Alna Litera 1994). 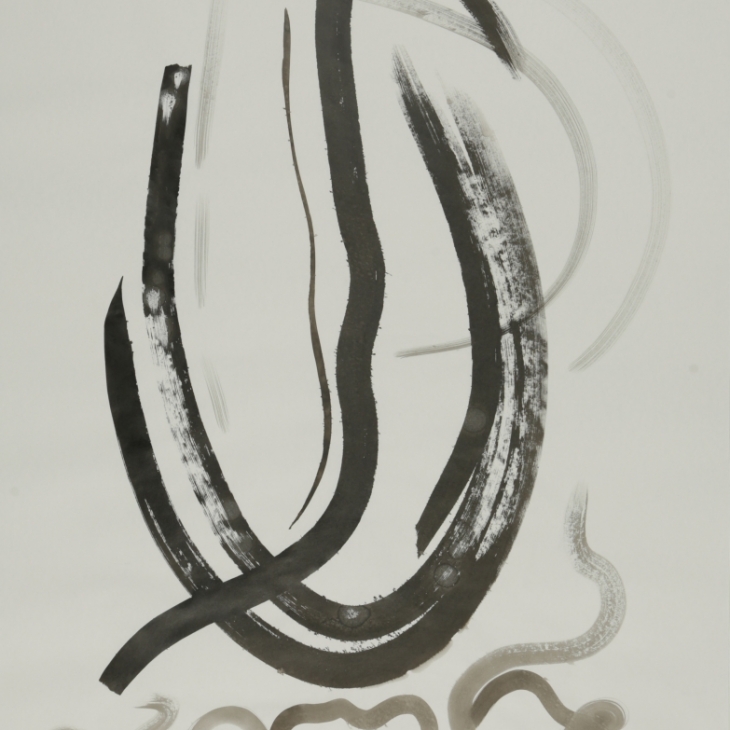 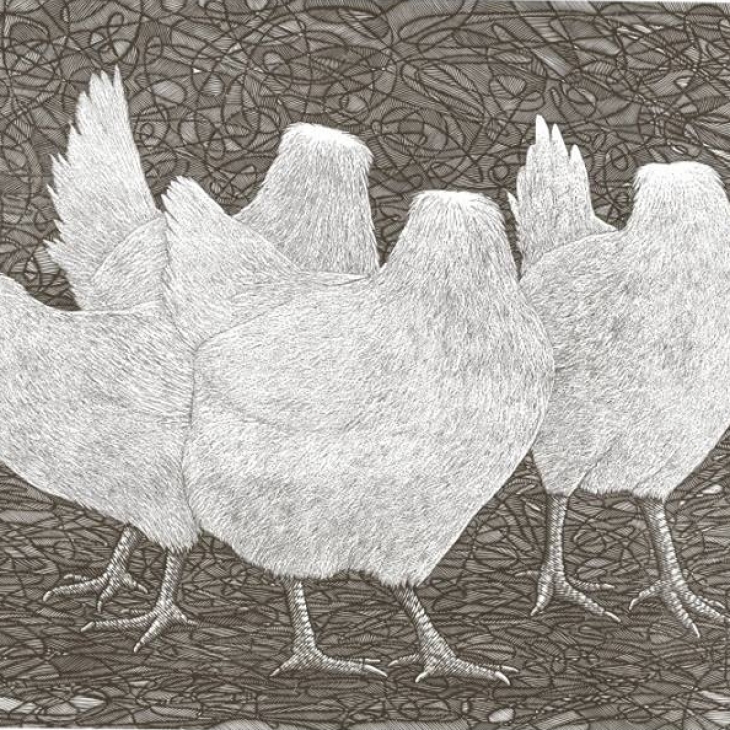 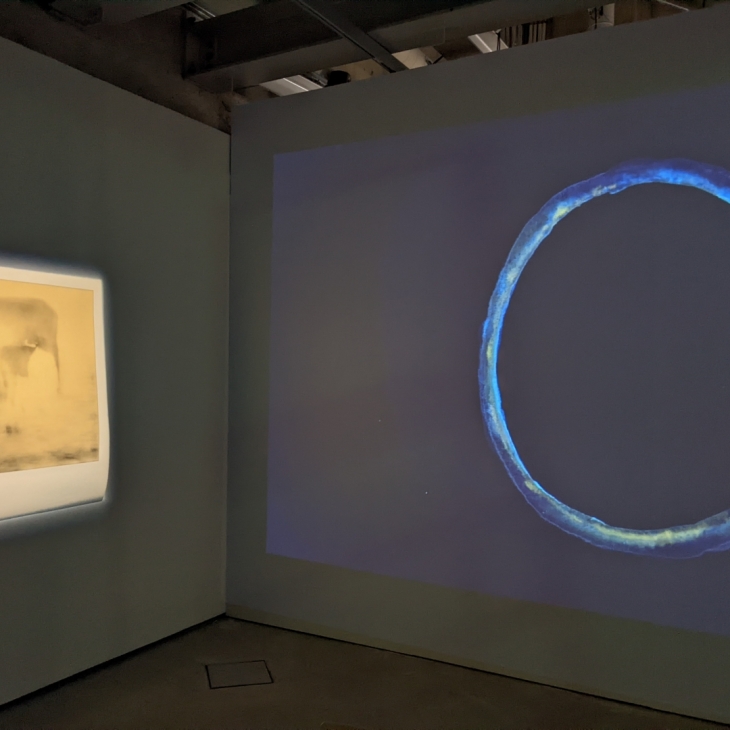 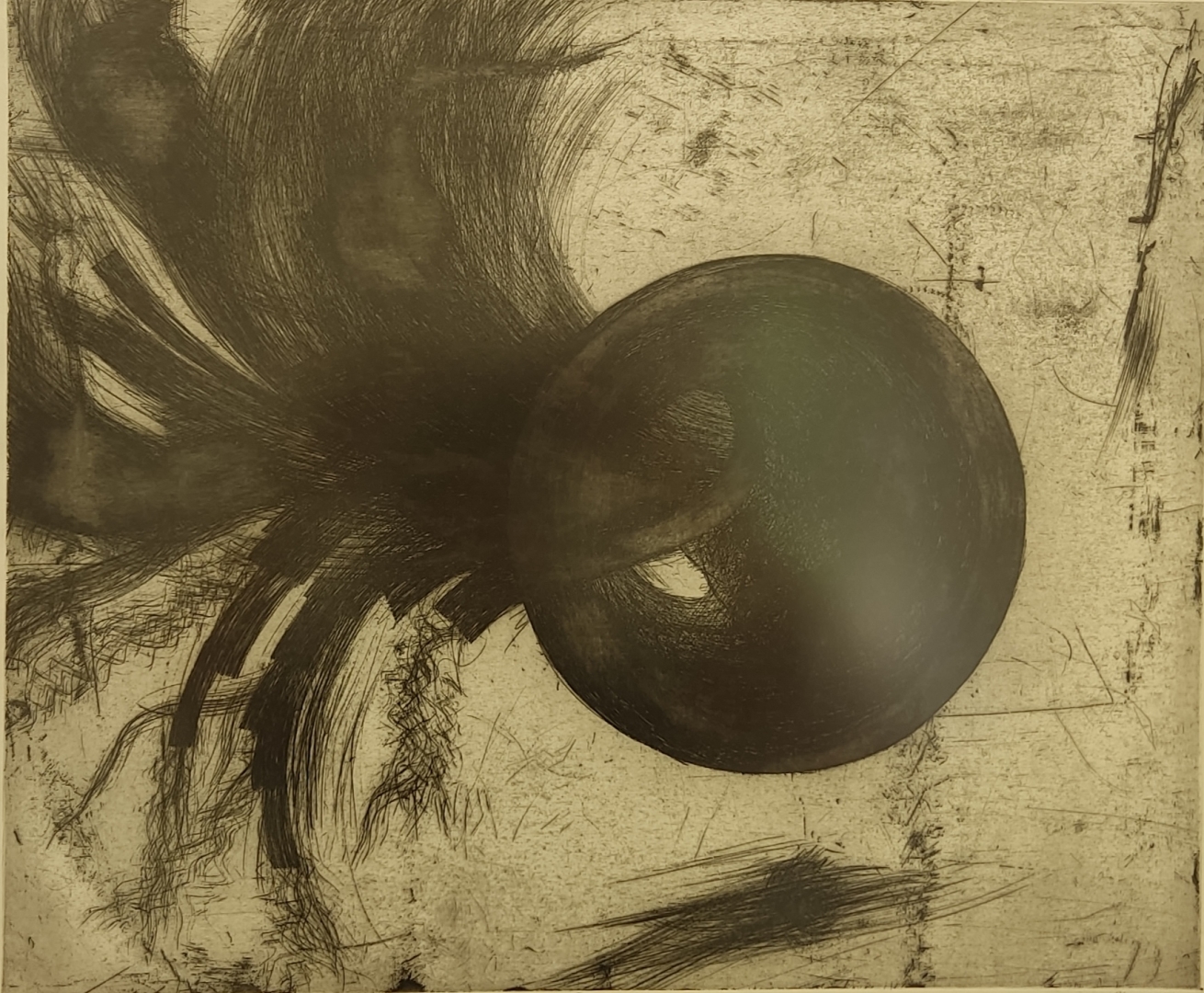