Penelope Umbrico (b. 1957) is an American artist who works with photographs found on the Internet. Her installations present a clever and playful way to examine the enormous production and consumption of photographs in the 2020s. 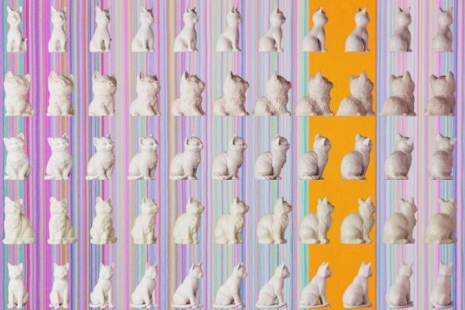 Umbrico ventures into the virtual world of online marketplaces. Tori.fi, eBay and Craigslist are popular marketplaces from which the artist uses images in her installations. Although millions of photographs are uploaded daily on these sites, they are rarely seen as anything but a tool for business between a seller and a buyer. However, the inadvertent treasure trove of human activity found in the images turn these websites into useful photo archives. Umbrico presents these archives as a collective cultural self-portrait.

As autumn progresses in Finland, the exhibition begins with a much-needed source of light, the Sun. However, when we look at an image of the Sun on a screen, we are actually seeing light from the screen instead of sunlight. We are experiencing sunlight, to an increasing extent, only as image conveyed by a screen.

Some of Umbrico’s works deal with technical advancement, technical failures, and technological obsolescence. In her art, she shows the beauty hidden in failure. A “bad” photograph taken to sell a broken item or a screen that will inevitably be taken to landfill is given new life in Umbrico’s art.

For this exhibition, Umbrico has structured the elements into a fugue-like composition. “I have begun to think of the various images in this work as a fugue in multiple parts. Compositionally – as in a musical fugue where variations of harmony and melody are presented in different sections and stages which pulsate and intertwine with each other – and socially, in the psychological sense of a fugue state where the loss of awareness of one’s identity creates a disorientation and wandering about. For me, this disoriented state-of-being implicitly describes current phenomena – the replacement of sunlight with screen light; the incongruity of experiencing everything almost entirely online, and of nature subsumed to the patterns of web platforms and screen space.”

This is Penelope Umbrico’s first solo exhibition in the Nordic countries. The exhibition is curated by Anna-Kaisa Rastenberger.